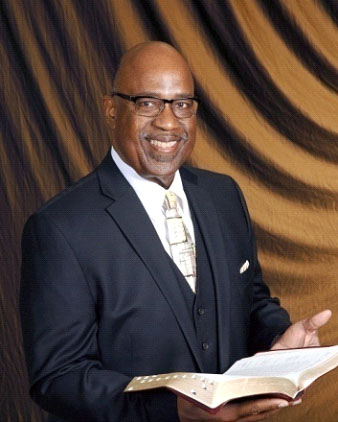 Hewitt Clifton Sawyers was born and reared here in Williamson County—College Grove, Tennessee, where he lived throughout his childhood. He is one of four children born to the late Clifton and Lena Pearl (Claybrooks) Sawyers.

At the age of 15, Pastor Sawyers joined the Locust Ridge Primitive Baptist Church. He was a very active member, ministering in several areas—junior deacon, choir member, member of the brotherhood, and taught Sunday school.

Pastor Sawyers graduated from Natchez High School in 1965. Upon graduating from high school, he enrolled at Tennessee State University (TSU). In 1969, he graduated from TSU with a Bachelor of Science Degree in Plant Science. After graduating from college, he landed a job with the U.S. Department of Agriculture and moved to Clarksville, Tennessee. While in Clarksville, he united with the Mount Olive Baptist Church, where he was also very active, serving as vice-chairman of the deacons’ board, member of the finance committee, teaching Sunday school, and working with the youth.

In 1971, he married Annie Corrine Gardner of Springfield, Tennessee and God blessed them with three daughters—Carissa, Angela, and Consuela. A few years later, he joined the Alpha Phi Alpha Fraternity (1975).

In 1977, Pastor Sawyers received a promotion on his job that required him to commute to Nashville. This prompted him to return to Williamson County with his family in 1980. He reunited with the Locust Ridge Primitive Baptist Church. Two years later (August 1982), he acknowledged his call to the gospel ministry and was licensed to preach. In an effort to better equip himself for the task for which God had called him, Pastor Sawyers enrolled at American Baptist College. He certainly had the favor of God in this endeavor in that he was working a full-time job, going to school full time at night, and prior to graduation would be called to pastor a church. Yet, he earned a Bachelor of Theology Degree in 1986, graduating with honors.

In 1983, Elder Sawyers was ordained and accepted God’s call to pastor the West Harpeth Primitive Baptist Church. He remained a bi-vocational pastor until he took a leap of faith in 1995 and left his job with the U.S. Department of Agriculture, where he assumed various roles in the field of lending, to commit to full-time ministry at West Harpeth.

Our pastor is recognized locally and nationally. He served as Vice-Moderator of Cumberland Association from September 1991 through 1998. He resigned in 1998 and in September of the year 2000 he was elected Moderator and served for ten years. On the national level, he has served as treasurer for the National Primitive Baptist Convention for 15 years to date. He has and continues to serve on various boards including the U.S. Community Credit Union (Vice-Chairman of Board of Directors), Habitat for Humanity (past board member), Franklin Housing Authority (Past Chairman of Board of Directors), and Cumberland Association (Executive Board Chairman).

In April of 2008, Pastor Sawyers was presented with a certificate of honor from the great State of Tennessee by Thelma M. Harper, member of the State Senate, 19th Senatorial District. This certificate was given in recognition of 25 years of inestimable service at West Harpeth. He also was named “Pastor of the Year” by the African American Heritage Society.

Pastor Sawyers is a man of wisdom and is known throughout the city of Franklin and surrounding areas. He is called upon in many arenas to give words of encouragement, pray, counsel people from the past, present, members of other churches, and people he doesn’t even know. In March of 2013, the Mayor of the City of Franklin, Ken Moore, presented Pastor Sawyers with a proclamation in recognition of 30 years service of successful pastoring at West Harpeth; for being seen by many in the church and community as a visionary; for serving the people with love and dedicated service; and for overall being a caring and sharing Christian, who is passionate about his love for the Lord. Mayor Ken Moore designated March 18, 2013 as “Reverend Hewitt C. Sawyers Day.”

Lastly, Pastor Hewitt Sawyers is currently enrolled in the Masters/Doctorate Program at Trinity College of the Bible and Theological Seminary.

The Deacon is the second officer of the church elected by the congregation with final approval of the Pastor. Deacons are men who are ready, willing and able to support the framework of the entire church. He should not be a new Christian. The Deacon should be a man full of the Holy Ghost and wisdom. He should have reasonable business knowledge, have a love for and be able to work with people, have an orderly household, and be committed to Christ and to the church and exhibit a Christian example.

The trustees serve as the financial and physical management arm of the church and act in an advisory capacity to the Senior Pastor. Persons holding the following positions make up the board of trustees: chairman, past chairman, financial secretary, assistant financial secretary, treasurer, building manager, grounds manager, purchaser, and member-at-large.